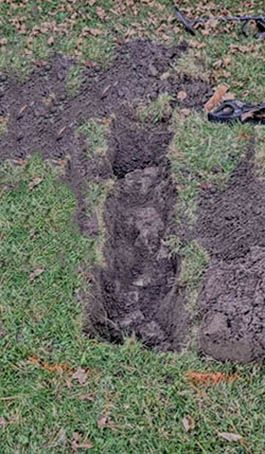 A client reached out to Ground Penetrating Radar Systems for assistance in locating a buried foundation wall at a historical site. The site was located in Central Pennsylvania and dated back to the 1700’s. According to the client, the town was founded in the mid 1700’s, while the oldest building was dated in the late 1700’s. This raised suspicion with the client, because if the founding date of approximately 1750 was correct, then the founder had to live somewhere before the oldest building was recorded in roughly 1790. The client reached out to Ground Penetrating Radar Systems, who was able to assist the client with the project. Sam Hart, who is the Project Manager for GPRS in the Central Pennsylvania area, was able to find an existing foundation wall buried less than a foot below the surface. This foundation wall is believed to date back to the 1700’s when the founder discovered the small town. Sam Hart is based out of the Harrisburg office and covers the mid-state.

GPRS performs GPR scanning to locate any utilities or anything subsurface before drilling or excavating. For any projects in Central Pennsylvania, contact Sam Hart at (717)798-5721 or sam.hart@gprsinc.com. Ground Penetrating Radar Systems has a representative in every major city, so we are able to come out and scan as soon as you need us. It’s always best to have as much information available about anything that may subsurface before any project. It can save money as well as ensure a safer working environment.