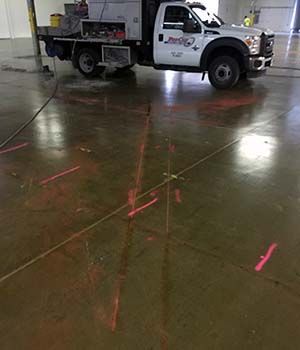 GPRS of PA Helps Prior to Saw Cutting

A General Contractor called Ground Penetrating Radar Systems to locate a 480 Volt electrical line before saw cutting in Lancaster, PA. The General Contractor was replacing the entire concrete slab, which was approximately a 200’ x 100’ area. They hired Ground Penetrating Radar Systems, who specializes in locating anything subsurface. Sam Hart was the technician hired to complete this task. He was able to scan the concrete to verify the location of the 480 Volt electrical line, as well as other conduits running through the concrete. Sam Hart mapped out any potential conflicts, which he communicated with the General Contractor before they began their saw cutting.

If you need any assistance before trenching, you can reach Sam Hart at (717)798-5721 or sam.hart@gprsinc.com. It is always better to be certain of where everything is before saw cutting, core drilling, or excavating, than to go into the job blindly and risk the safety of others. This particular project was in Lancaster, but Sam covers the entire mid-state area. He often works in York, Lewistown, and Reading.